Coastal areas are major suppliers of agricultural produce due to their proximity to urban centers and the usually conducive circumstances of adequate land and moisture. An important challenge is to manage water levels in extensive low-lying flat areas. Roads in these areas can play a major role: they are usually the only infrastructure present in low-lying areas that can be used to control water levels. Table 4.1 considers a number of practices:

At present, the effect of roads on surface hydrology is generally not taken into account during road development, in particular for smaller roads and footpaths. This results in road damage due to seepage (see pictures) and waterlogging around roads, and opportunities for improved productive water management are missed. With the exception of major highways, local road management agencies/institutions do not typically conduct hydrological surveys for the development of new rural roads. The criteria often used in the design of village roads are mainly based on traffic, public demand, land availability, and socioeconomic connectivity (access to markets and surrounding villages).

However, it is essential to take basic hydrological considerations into account when developing roads in low-lying coastal areas, including flood drainage, stream channels and topography, afflux, debris properties, scour risk, road alignment, soil conditions, and fish movement (Queensland 2015). If a hydrological survey is impossible due to lack of resources, local community groups could undertake landscape mapping. Such mapping could include location of the road, current land use on either side, the micro-relief of the area, the location of cross-drainage structures (culverts, pipes, and bridges) and the need for gates, and water retention and drainage requirements for agriculture and aquaculture.

Planning the boundaries of roads and paths as divisions among high-, middle-, and lowlands in low-lying coastal areas

Roads redefine the surface hydrology of low-lying coastal areas, dividing it into high-, middle-, and lowlands. Each level of land will have its own best usage and cropping pattern. To the extent possible, roads should follow contour lines and compartmentalize farmland at different levels. This will optimize productive use at each level of land.

If there is a suitably detailed Digital Elevation Mode (DEM), this can be used, but it is unusual to have DEMs that capture the micro-elevation in coastal areas, which may range from 50 to 150 cm. If no DEM is available, roads as divisions among high-, middle-, and lowlands in low-lying areas (as well as the location of cross-drainage structures) may be planned based on systematic discussion with local organizations and local governments.

The compartmentalization of land at different levels can also be used to slow peak rainfall runoff by storing it behind the polder road embankment before it overflows onto the next stretch of land. This slows the velocity of water, reduces erosion and siltation, and leads to more groundwater recharge. Water can be retained longer in higher areas and serve as storage for lower areas or be used for the cultivation of rice and shrimp in the wet season.

At present, drainage structures (culverts and pipes) are not always integrated into the initial road design. The location of culverts or pipes is sometimes decided later on, when road damage happens due to seepage or when waterlogging occurs. There is rarely consideration of how to remove drainage water. Rather than using such a gradual approach, it may be better practice to decide on the drainage requirements when the road or pathway is first constructed. A ready-reckoner “gap rule” may be used, especially for community roads. This rule is used in Bangladesh, for instance. It describes the recommended length (in meters) of drainage openings (bridges, culvers, and pipes) per 100 m of road (Table 4.2). It is based on the type of road and geographic location.

In deciding the location and type of cross-drainage structures, the following steps are recommended:

Use gated crossings to retain and control water

Gated water-crossing structures (see pictures), particularly on box culverts and pipes, will help to control water levels with the road infrastructure, especially with roads inside the polder.This practice is not recommended for roads that serve as flood embankments (see 4.3.2). Water levels in a large area can be controlled with these relatively simple devices. They also make it possible to manage the water level in the upstream area for rice cultivation, for instance, by opening or closing the gate. By opening the gates, water upstream can be released, and the area can be drained, for instance, when fertilizers and other agricultural inputs need to be applied. In this way, controlled cross-drainage from roads goes hand-in-hand with the cultivation of high-yielding varieties.

The gates on the cross-drainage structures can also be used to manage water storage upstream of the roads, for instance, for dry season cultivation or for aquaculture. In this case, it may be useful to provide additional protection to the roadside to prevent it from being affected by the high water levels.

Gates should be provided at specific locations based on local discussion and agreement to control drainage; manage water levels of fields, canals, and ponds; and increase water availability for different purposes (irrigation, fisheries, and households). The gates may be made of wood or iron, but an important consideration is that they should be theft- and tamper-proof. Local discussion should also create clarity on the rules and responsibilities for operating the gates.

For gates on cross-drainage structures, the following are recommended:

Especially where there is more than a 0.50 m difference between upstream and downstream land, scour protection may be provided with vegetation or small stone pitching both on the upstream section and the downstream flow path. This will prevent damage from water gushing through once upstream water is released.

In Liberia, lowland rice cultivation is common. Roads in several areas have disturbed their hydrology, but in other cases ‘clever’ dual purpose road culverts have been used to regulate the rice cultivation. The road culverts have a dual propose: they act as micro dam and a bridge to cross a small river. They have two outlets: a higher larger one (60 cm wide) in use during the high rain season allowing more water to pass and a smaller one (12 cm) for the dry season to let a controlled flow to the irrigated rice field on the downstream side. The small pipe directs the water to the irrigation canal built on the downstream side. The intake of the canal on the culvert is gated and can be opened or closed depending on requirements. Roads also have an impact on the movement of wild fish in low-lying areas. The road should not obstruct fish migration routes, and bridges should be placed in accordance with major migration routes. Culverts have relatively small openings and are less suitable for maintaining fish migration routes. Therefore, bridges are preferred to minimize impact on fish ecology (Douven et al. 2009). Nevertheless, culverts and pipes are the main passages for fish and other aquatic animals in wetland areas. A number of considerations apply if culverts are used as fish passages (Figure 4.2):

Use borrow pits for multiple functions

Borrow pits (see picture above) are excavations performed to collect materials—sand, gravel, soil—for road construction and maintenance. They are typically located parallel to the road. For instance, the standard criteria for borrow pits in Bangladesh (LGED 2004) are as follows: the depth should not exceed 1.5 m, and the width of the embankment’s side berm and the edge of the borrow pit should be from 3 m to 10 m.

Borrow pits will fill with water during the monsoon season. They serve several useful functions (see use in Nepal):

It is useful in most instances not to backfill the roadside borrow pits but instead to discuss their location and dimensions with the users and owners of the land where they are located, preferably under the guidance of local community groups. The location of borrow pits in low-lying areas should follow a number of considerations:

Use roads to raise lands

Roads in low-lying areas can be used to capture sediment by increasing the land level on one side to gradually deal with river water-level rise. This practice now occurs by chance but can be managed better. The impact can be noticeable. For instance, in Polder 2 (Shatkira, Bangladesh) the ground level has increased 15 cm on the upstream since the road was built 20 years ago. The higher ground is less prone to flooding and/or waterlogging, and farmers can grow a wider variety of dry-season crops. The land rise (75 mm/year) in this area is higher than the sea-level rise (4 mm to 8 mm/year) and the land subsidence. There is reason to use roads to trap sediment in selected low-lying coastal areas. This can be done as part of polder-level road planning, informed by hydrological mapping. The following would be required:

Reuse the excavation material from canals to increase road levels

The internal drainage in low-lying areas often consists of a network of canals, usually the original coastal creeks. These canals are multifunctional: they remove excess water when required but also serve as water storage or are used for aquaculture. 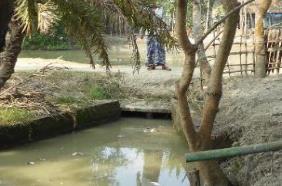 Siltation of canals is a constant challenge: it will increase the water levels in these drainage canals by causing drainage congestion and waterlogging. Regular cleaning and re-excavation of canals are needed to ensure system connectivity, continuous water drainage, and more water retention inside the polder. The excavated silt can be reused systematically to create land for agriculture, increase the level of cultivated areas, increase the level of settlements, and build roads and/or embankments and flood levees.