Roads play an important role in flood disaster response. Because of their higher location, they serve as emergency flood shelters and provide evacuation routes. Emergency shelters have been constructed in several areas. However, these shelters are unable to accommodate the entire population in an effected area. For this reason, roads complement typhoon shelters and other flood-response measures. There are several good practices to better connect road development and emergency responses in coastal areas.

Recommended practices for roads as flood shelters and evacuation routes

Prioritize the development of roads that connect to emergency shelters

In developing roads, one priority must be the roads that connect to designated emergency shelters. In making a road development plan for a coastal polder, the road network should be designed in such a way that it is possible for humans (especially women, children, and disabled people) and livestock to reach the safe place in a short distance. Road development should be part of Disaster Risk Management planning.

Prioritize the development of roads in the lowest areas

Roads also provide important functions during floods, serving as safe shelters during and immediately after floods. These functions should be systematically strengthened. In designing new roads, priority may be assigned to the road sections in the lowest part of an area and to raise them to at least design specifications (1/20-year flood levels plus 0.3 m additional free board). Where possible, excavation material from local canals may be used.

In addition to raising the roads in the lowest sections of low-lying coastal areas, levees may be created along internal roads and along specific embankment sections to shelter people and livestock during floods and high-water events. These higher sections should be created especially in high-risk areas, using the remaining silt from the excavation of canals, ponds, or rivers. Such sections along the roads could provide the opportunity to accommodate temporary flood victims (people, cattle, and goods) until their homes have been rehabilitated. The use of these levees should be regulated by the local governments to avoid the undesired permanent occupation of flood shelters. Levees should be spaced strategically at distances so that they are accessible throughout flood-prone areas, placing them along more exposed sections of flood embankments so they can serve as additional reinforcements. The same may also be done for the area outside the embankments.

As a rule of thumb, the minimum space needed for a person to take shelter lying down is 1.5 m2 or 3.5 m2 for a sphere standards space (Red Cross 2013). An average household in Bangladesh, for instance, has 4.6 members (Begum 2004). A family needs a shelter area of approximately 15-16 m2. For livestock, a space of 2 m to 4 m per head would suffice. Therefore, 85 people can take shelter (without livestock) on a longitudinal section of 100 m of embankment with a width of 3 m. If there are multiple areas of 300 m2 in specific locations along an embankment, the number of people who would benefit from temporary shelter is proportionally higher.

It is also important to protect such levees by stabilizing their embankments through the planting of hedges, vetiver, and other grasses on their slopes and toes to protect them from erosion (Islam 2000).

Despite emergency preparedness programs and early-warning systems, pre-emergency evacuation remains a challenge in coastal villages of developing countries. In rural areas there remains a lack of awareness and communication to enable people to understand the warnings and evacuate. Moreover, dissemination of warning messages is inefficient, because poor residents in coastal areas may not have means of communication (Haque et al. 2012). During floods and typhoons, roads are an important part of the evacuation of people and livestock. Part of emergency preparedness should be to plan evacuation routes. This can be done by: 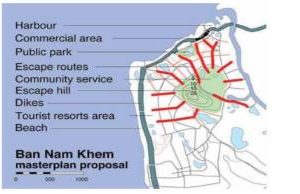 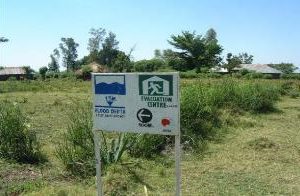