Flood embankments, next to their role in flood protection, are used in coastal areas for transportation. In addition, some newly developed roads in coastal areas double as flood embankments. Because different organizations may be involved (road departments, disaster risk reduction departments, or water departments), it is important to synchronize the criteria for roads and embankments with regard to width, side slope, and height. Similarly, the planning of the development of roads and embankments should be coordinated. Traffic functions and flood safety should be combined and not compromised. Table 4.3 and Figure 4.3 offer an overview of recommended improved practices in this field:

Embankment roads should be designed and constructed with sufficient width and height to ensure protection from floods, land preservation, and transport functionality. Using Bangladesh as an example, the standard design of village roads for small-scale projects (<1,000 ha) (LGED 2004) establishes a minimum crest width between 2.5 m and 4.9 m for road embankments, while the standard Road Design Manual 2 (LGED 2005) establishes a crest width for village roads of 5.5 m. Moreover, the current crest width used by the Bangladesh Water Development Board (BWDB) for embankments is 4.3 m. It was proposed that an agreement among road and water institutions be reached on a common standard crest width for road embankments (a minimum of 5.5 m). This also creates extra space for human and livestock shelters during flood events.

Moreover, the development of new design criteria for embankments and roads should be based on future climate scenarios: standard crest width and height based on a return flood period of 1:100 (or 1:200 for large rivers), adequate side-slope protection, and size and number of drainage structures based on climate change. Road and water management organizations should work together and establish common standard criteria for embankment and road design.

The development of roads and embankments is not always coordinated in practice. This is manifest in roads being carpeted on embankments before these have reached their safe flood levels. There are also instances where even the top of the embankment has been lowered to accommodate the width required for the road. Road and water organizations should come to agreements on what is required in advance of road construction. Because the crest width and the side slope prescribed by water organizations is binding, the budget for road development should include provisions for raising the road embankments to safe levels as well as road pavement and subgrades. When developing a road on an existing embankment, the effect of compaction of the existing embankment should be accommodated as well. If a road is constructed on an embankment that is not yet at prescribed levels, the pavement is considered temporary and may be demolished to be rebuilt after the embankment is raised.

Use turfing or vegetation for side-slope protection

Measures to protect side slopes should be incorporated in the initial design of roads or embankment roads and the berms of the embankments (Islam 2000). Local vegetation (grass and shrubs, but not trees) should be used to protect the side slope of roads, in particular the embankment roads. Suitable grass species such as vetiver at 0.3 m x 0.3 m spacing, mixed with Ipomoea, Nypa, Typha, and Pandanus (Islam 2000), may be used. Vegetation on the berm slopes is a barrier against runoff and erosion. Slope protection with grass increases the stability of the slope and decreases road erosion, leading to road stability and flood resistance. Turfing can be combined with the use of jute or coir netting to prevent soil erosion (Figure 4.4).

Species should be selected in consultation with the local community. Land in coastal areas is often at a premium and is heavily contested. The use of side slopes and the protection of newly planted vegetation should be discussed with the local government as well to decide on who is allowed to use the side embankment and who is responsible for guarding the side slope, and how this is to be supervised and enforced. In addition, grass vegetation should be evenly spread and well maintained, and no animal paths with associated gullies should develop and undermine the embankment. On the other hand, if the vegetation is evenly spread, the hoof action of animals may compact and strengthen the embankment. 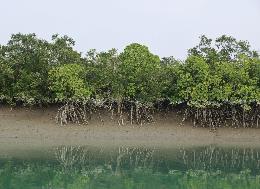 Coastal-area embankment roads may be also protected by a 50 m to 200 m wide belt of mangrove (Figure 4.5) in tropical regions or by non-mangrove planting following the staggering method. This practice may also decrease the impacts of storm surges and the tidal effect (Islam 2000). Mangroves retain nutrients in their roots, increasing soil stability and keeping up with sea-level rise (Alongi 2008). Moreover, mangroves act as a buffer against strong winds and the cyclone tidal effect.

A special, newly developed method to prepare or repair embankments is the Green Soil Bag. This is a unique measure developed to block water like a traditional hessian sack. The major advantage compared with the traditional sandbag is that the Green Soil Bag is fully bio-degradable and filled with mix of grass seeds and rich earth. The seeds will germinate depending on the temperature and grow outward through the jute. For the first 1.5 years, the bag itself will ensure stability in the dike/embankment. Later, the bag will be digested and the grass net will take over the function, blocking erosion by rooting of the subsoil. Dutch water boards use this smart and simple invention to strength their levees and harvest the grass. Green Soil Bags were designed to repair dikes and flood defences, increasing their height. The Green Soil Bag was also introduced under a pilot project in Gondamari, Bangladesh, where local communities are very enthusiastic about evidence of good initial results. 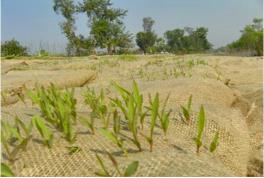 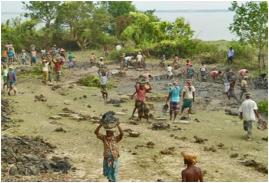