Semiarid areas cover 15.2 percent of the world and are home to 1.07 billion people (14.1 percent of the global population). They are defined by an aridity index of 0.20 to 0.50, meaning that actual precipitation is between 20 and 50 percent of evapotranspiration. Because of the sheer population size and their climate being “on the edge,” semiarid areas are most vulnerable to droughts.

There is enormous potential to connect road building and water harvesting in these areas. Semiarid areas are not only characterized by relatively low overall annual rainfall (typically less than 600 mm), but also by rain being concentrated in part of the year, usually in one or sometimes two rainy seasons. The retention of rainfall in semiarid areas is of vital importance: it assures the availability of water and moisture for productive and consumptive use in dry periods. Moreover, especially if done intensively, the impact goes beyond providing more water for agriculture. Having more moisture in the landscape, for instance, also improves soil fertility because nitrogen fixation is accelerated in moist soil conditions. It also improves the landscape microclimate: more moisture in the soil will affect soil temperature and thus the area’s ability to deal with temperature shocks.

This chapter advocates for a systematic optimization of the effect of roads on moisture and water in semiarid areas and, as much as possible, the combination of water harvesting and road building. The sheer magnitude of road programs makes them a powerful asset for retaining water in semiarid areas. Moreover, as discussed in the first chapter, there is a triple win, because beneficial road water management in semiarid areas can also contribute to reduced damage to the roads.

If one were to take a soil moisture map of an area and overlay it with a road map, one would likely see strong correlations. As roads influence surface and subsurface flows, the moisture in a landscape can be significantly affected by where the roads are located and how they are constructed. Roads can block surface and subsurface flows, creating moist stretches upstream of the road and dry patches downstream. Road drifts in riverbeds, if properly constructed, may retain subsurface flows and spread floods, again enriching the moisture in the area. On the other hand, erosion from culverts and road drainage may create gullies that deplete the moisture around them.

Road infrastructure itself can be used to harvest water and redistribute runoff to areas where it is beneficial. Roads either act as an embankment that guides water or as a drain that channels rainwater. This can be used in a systematic manner. The amount of water that can be harvested depends on the rainfall pattern, the catchment area as defined by the road, the rainfall patterns, and the land use and soil characteristics within the catchment area. For a road to act as water harvesting mechanism, the road drainage mechanism needs to be well developed by having the road on an elevated embankment, having a system of side drains or cross drains, or having drainage structures such as water bars and rolling dips integrated into the road surface (the latter particularly for unpaved roads; see Chapter 9).

Table 2.1 presents the order of magnitude of the amount of water that can be harvested from 1 km of road equipped with drainage facilities.

The challenge is not only to capture the rainfall runoff, but also to store it for later use. Runoff in the landscape that is guided by road infrastructure can be stored in three different ways: 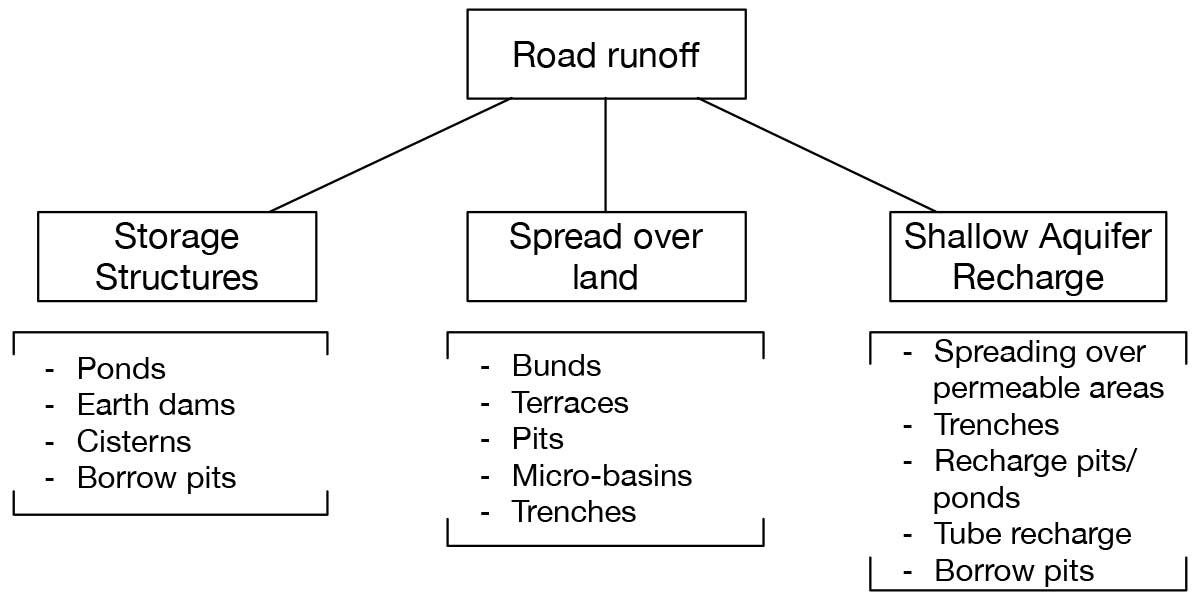 The different storage methods are contrasted here. But in reality, for road water harvesting in semiarid areas, there is usually no “either/or,” and all three storage methods can be used simultaneously. In many cases, road-water harvesting can be part of larger watershed improvement programs that deploy a broad range of methods to capture and store runoff, with road-water management being a part of this (see Box 2.1).

Every year, millions of people are engaged in Ethiopia to work on soil and water conservation and water harvesting during the Mass Mobilization. The 2016-2017 road and hillside water harvesting campaign in the Amhara Region involved 1,450,000 persons and benefitted 751,000. In Tigray, 1,306,000 persons were involved and 409,000 directly benefitted.

The main goal is to reverse severe land degradation and work on retaining runoff in the landscape. Men, women, and youth contribute 20 to 30 days of free labor during the February to April slack labor season. The approach involves organizing land users in development teams of 20 to 30 members, further divided into work teams of five members. Activity planning is done locally and includes the collection of field measurements. Women and men participate equally in the work groups and as team leaders. Activities undertaken during the Mass Mobilization are mostly carried out on cultivated lands. The regional Woreda (district) and Kebele (sub-district) administrators, specialists, and development agents coordinate the implementation and planning of the approach. Planning and measurement are conducted by land users themselves. The target area is defined by administrative and as well as watershed boundaries. The implementation plans are later discussed with the communities. At the end of each day the work group evaluates its activities and discusses the plan for the coming days.

The hydrological and socioeconomic impact of these technologies has been measured since 2015. Monitoring data have shown an increase of 1.2 to 2 m in groundwater levels during the dry period. Soil moisture next to the road has increased up to 100 percent in some cases and farm productivity has risen by 35 percent on average. Moreover, there is the added value of protecting the roads from erosion, flooding and sedimentation, and the drastically reduced damage to the landscape. The costs and benefits were calculated: against an average investment of US$1,800 in the road-water harvesting measures there was a benefit of … due to reduced downtime and road maintenance, reduced damage from erosion, flooding and waterlogging, and of course the beneficial use of the water harvested.