Rural roads’ contribution to erosion is well documented, as clearly seen in roadside gullies and landslidesBecause there is extensive and rich literature on preventing landslides during road development, this subject is not repeated in these Guidelines. as well as in road aggregates washed from the surface of unpaved roads. Measures to control and prevent erosion should be part of road construction and maintenance. These include several of the measures discussed in sections of this chapter as well as in Chapter 10, which is concerned with unpaved roads: well-placed road alignments (slope, bends, and drainage system), check dams, infiltration bunds, rolling dips and water bars, reinforced culverts, and water spreaders.

The road represents a change in the natural topography, opening fresh slopes (as discussed in the previous section) that may be protected by several mechanical and biological measures. It is also important to introduce these erosion-control measures simultaneously with the road’s development to keep erosion from developing.

There are several methods of biological treatment. The two most popular are bio-engineering and the use of stabilizing plants, in particular vetiver grasses (Chrysopogon zizanioides). Bio-engineering is the use of plants for slope stabilization and runoff control. It involves using plant parts such as roots, cuttings, and stems as a cost-effective and locally adaptable means of erosion control. Bio-engineering ranges from planting deep-rooted species to a combination of vegetation with civil engineering structures. Examples of bio-engineering include planting grass lines along contours vertically or diagonally, turfing, jute netting together with seedlings, brush layering, fascines, palisades, wattling, live check dams, bamboo fencing, and vegetated stone pitching (Devkota et al. 2014) (see Annex 1).

Vetiver grows in practically any soil and therefore also performs well in soils devoid of nutrients such as fresh cut/fill areas (Greenfield 2008). Its deep roots make the grass able to withstand high runoff speeds and volumes. Vetiver is a very resilient plant that can grow under a range of climate conditions with air temperatures ranging from -15o C to more than 55o C and rainfall varying between <300 mm and >5,000 mm. Vetiver has a range of uses: stope stabilization, vegetation rehabilitation, and as a source of fodder and thatch (Pinners, no date). Parallel hedges need to be established on steep slopes that are the result of road construction work in order to control runoff erosion. Although common in some countries, useful tested methods have not yet been introduced in many countries where they could make a significant contribution. The same applies for bio-engineering. While very popular in Nepal, for instance, it is unknown in other countries.

There are also opportunities for roads to positively contribute to erosion control in watersheds. This section gives a number of examples:

Road platforms or small fords may be placed at erosive stream crossings to stabilize them. They will retain the streambed material and allow water to spread over the breadth of the road body before it is discharged downstream. This will make stream flows much gentler. If such road platforms are raised on the uphill side, they can help stabilize the stream and even build up a small sandy layer in the streambed that can act as water storage and connect to the aquifer surrounding the stream. Chapter 8 discusses in greater detail the principle of such road drift acting as “sand dams.” If a river is filled with a thick layer of sand gravel, it will feed the groundwater adjacent to it. It is preferable to build a series of such stabilizing structures on a stream at different road crossings. Small sand dams may be added in some cases.

The fords may be straight with a dip-down road (see Figure 3.6). This will divert the runoff from the road surface and guide the water from the stream. The ford may also be parabolic in size to mainly facilitate natural streams overpassing the road. The advantage of these fords is that they spread the water over a larger width of the riverbed, causing less damage to the stream bed and stopping whatever rutting appeared in the riverbed. The fords also hold the bed material in place. An advantage of such stream crossings is that they do not become clogged. The disadvantages of the fords are that the road may not be passible during (short-term) floods and are most appropriate on low-volume roads.

Figure 3.6 Road ford in Kitui, Kenya and diagram of road ford with longitudinal slope to allow the crossing of a natural stream with a permanent rolling dip added to divert water from the road surface (credit Masila). The rolling dip is done with either concrete, masonry, or rocks (source: Bender 2009) 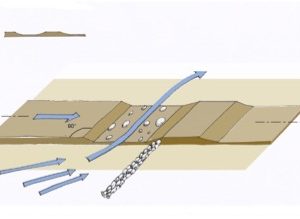 Figure 3.6 Road ford in Kitui, Kenya and diagram of road ford with longitudinal slope to allow the crossing of a natural stream with a permanent rolling dip added to divert water from the road surface (credit Masila). The rolling dip is done with either concrete, masonry, or rocks (source: Bender 2009)

When roads cross unstable and highly erosive landscapes, they can be used to reduce the land-degradation process. One should avoid placing cross drainage on the steepest or most erodible sections in a watershed, but instead concentrate runoff in the more stable streams.

In some highly erosive drainage lines, the choice can be made not to place a culvert or to place it with a high sill. This will disperse the runoff along the uphill side of the road and cause the stream to fill up in front of the road. This can help control the specific erosion hotspot.

Capturing eroded soils with roads in combination with warping dams

Warping dams are relatively high retaining structures constructed to capture soil in highly erodible landscapes. They fill up on the upstream side, creating stable and fertile terrace land from where runoff water can be better managed. Once the land area is filled up, the water streams can regularized. Roads can be combined with such warping dams. Warping dams were used extensively in China’s loess plateau where the landscape was heavily degraded, but where hillsides were treated with a range of measures and valleys were blocked off with warping dams, creating fertile new land where there had been heavy erosion.