Watershed degradation is a pervasive phenomenon occurring in many parts of the world. Some have argued that its impact overshadows that of climate change. The degree of impact may be hard to assess, but it is clear that watershed degradation amplifies the turmoil caused by rainstorms and longer drought periods. According to IPBES (2018), land degradation is affecting the well-being of 3.2 billion people. Based on an extensive literature review, this same source estimates that land degradation costs more than 10 percent of the global gross domestic product (GDP), and it is related to the loss of services such as carbon sequestration and agricultural productivity. Fertile soil is lost at a mind-boggling 24 billion tons per year due to unsustainable agricultural practices. The main drivers of land degradation are the expansion of crop and grazing lands, current agricultural and forestry practices, climate change, urban sprawl, extractive industry expansion, and infrastructure development. Road network expansion has, in fact, been described as a trailblazer for this degradation (Ibisch et al. 2016).

An older study based on the GLADIS survey (Bai et al. 2008) also establishes that land degradation was on the increase in the 1991-2008 period and affected one-quarter of the global land area. However, the message from this global survey was that the picture is mixed. There are parts of the world where land quality has been declining—24 percent of the global land surface, in fact—but there are also areas where land quality has improved (16 percent). It is clear that managing watersheds globally remains an enormous challenge that is not to be underestimated, but that it is also possible to reverse the tide and improve the quality of our natural resources.

This chapter discusses the opportunities for roads to contribute to watershed management, rather than—as is often the case—causing the deterioration of watersheds. If a road is constructed, it changes the drainage pattern of the entire area. Surface runoff is blocked by road embankments and is typically concentrated in a smaller number of streams and drains within a watershed. Thus, there is more runoff in some of the natural drains, and other drains are no longer used (Figure 3.1). Because the first group of streams will carry higher volumes of water, this may create more floods and generate erosion and scouring flows that were previously unusual. In other streams that are blocked, downslope erosion will cease, and some areas may dry out. In general, however, sedimentation in water bodies will increase. The road network acts as an additional drainage network in the watershed, increasing the catchment’s drainage efficiency. Napper (2008) quotes Wemple (1996) who estimates that 57 percent of the road length in two watersheds in Oregon function as flow paths, with some road segments draining directly into streams and others through newly created gullies. However, as discussed in this chapter, road alignments will differ in terms of their hydrological connectivity.

Furthermore, roads affect the movement of shallow groundwater. A road that is made in cut may drain shallow aquifers that are located close to the surface. Depending on the geology, this may create new springs. In some geological formations, there is a strong likelihood of springs occurring after a road is incised through them, e.g., in sandstone or in weathered and loose basalt formations. Such springs are even more likely to appear when there is an impervious layer underneath the water-bearing fracture zone.

Equally, when a road is made in fill and an impervious roadbed is put in place (Figure 3.2), these will affect the presence of shallow groundwater. In this case, shallow groundwater movement is blocked, creating wet or moist conditions upstream of the road and possibly drying land and wells downstream.

All these phenomena add up to the risk of substantial landscape damage: erosion, sedimentation, flooding, waterlogging, and desiccation. Ultimately, this degradation of the catchment may turn against the road itself: roads in degraded landscapes are more vulnerable to damage by stream erosion, uncontrolled flooding, rockfalls, or landslides. The two-way impact can be immediate and spectacular, as when gullies developing from culverts regress and take the road with them or when heavy scour in drains along the roads undermines the road itself. The pictures below are examples of inadequate road drainage playing havoc with the road itself. 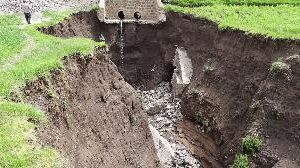 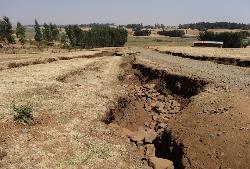 All these negative effects can be turned around. Roads, rather than being the nemesis, can contribute to watershed improvement. Changes in hydrological processes can be used to better manage the watershed, both by reducing the risk of damage and optimizing positive effects. In terms of the key objective of these Guidelines, we should better manage road-water interaction and create a “double-plus” resilience, not only to avoid landscape degradation, but also to designate roads to contribute positively to watershed improvement. This may increase water availability and vegetation cover, support economic activities, and reduce erosion in a catchment.

This section of the Guidelines discusses the positive interaction between roads and catchment management: how roads can become instruments in watershed management. It outlines a number of recommended practices in road development and maintenance. A main principle is to control water with road infrastructure and ancillary measures so as to decrease the speed of the water flows, guide water to appropriate areas, increase infiltration, and improve retention of subsurface water. A second principle is to use road development to address “erosion hotspots” and have controlled sedimentation processes.

Measures on and along the road can be further enhanced by supporting the development of new vegetation. The water channeled from the roads can be used to increase vegetation cover to water new plantations, support tree regeneration, or implement roadside tree planting.

This section provides broad principles for aligning rural road development to watershed management. Several of these detailed practices are discussed in greater detail in separate chapters of these Guidelines.

This chapter discusses the following practices: